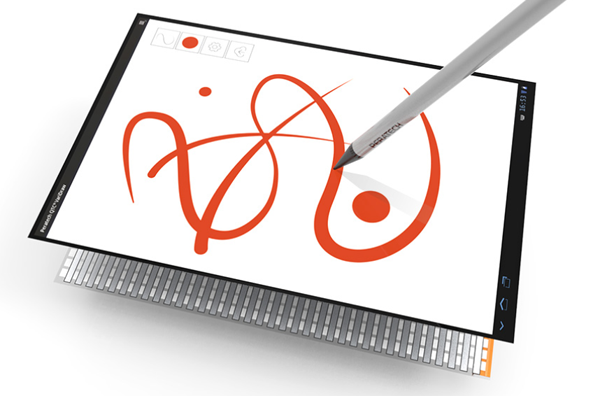 Peratech have created an amazing pressure-sensing material that can be used in conjunction with almost any surface, including touchscreens. In short, the material is a Quantum Tunnelling Composite (QTC) that changes in electrical resistance based on the force that is applied to it – the more force, the less resistance. This is achieved through the quantum tunnelling effect alongside other complementary conduction mechanisms.

Peratech’s sensor material is available in an opaque or clear, screen-printable, and bendable formulation that is 200 µm thick, works under multiple surfaces, and exhibits multi-touch capabilities down to 10 g pressure, including with gloved hands and passive stylus. Unlike capacitive touch mechanisms, it even works when wet, and the QTC has a much lower power consumption than capacitive alternatives.

Since Peratech’s sensor material is not necessarily linked to a visual user interface, it can be employed in much smaller parts of a product while still replacing a mechanical part. Take, for example, the button-based volume control on the edge of a smartphone. A Peratech sensor could be ‘printed’ in that location of the chassis, streamlining the overall design. With suitable programming, simple pressure activation could be replaced by gestures so that one could ‘roll up’ the volume as when using an analogue volume control.

In early July 2022, Peratech announced the integration of their QTC in the W-A-S-D keys of the Lenovo Legion 7i and 7 gaming laptops. In conjunction with Hydra™ user interface software, this put keyboard-based gaming firmly on a par with the controller-based alternative. With pressure sensitivity on each of these keys, keyboard-based gamers now had a level of control similar to those using the analogue sticks of a controller, enabling slow approaches and finer movements in game.

Due to the complex nature of the technology and the high amount of calibration required when combining the QTC with other materials, a general development board was found to not be useful to the average engineer, though they have existed in the past. Given this, if you are interested in their technology, we at ipXchange would endeavour to connect you with Peratech for a thorough consultation regarding your project. Should they be deemed the right company for the task, Peratech would then work with your engineers towards an end-to-end solution for your product, including designing the sensors to operate in conjunction with your required materials and providing the electronic, software, and control solutions that allow the sensors to operate in your application. Yes, it’s quite a complex process, but if Lenovo’s case is anything to go by, it’ll be more than worth it.

Looking for a bespoke pressure-sensing solution for your end product?