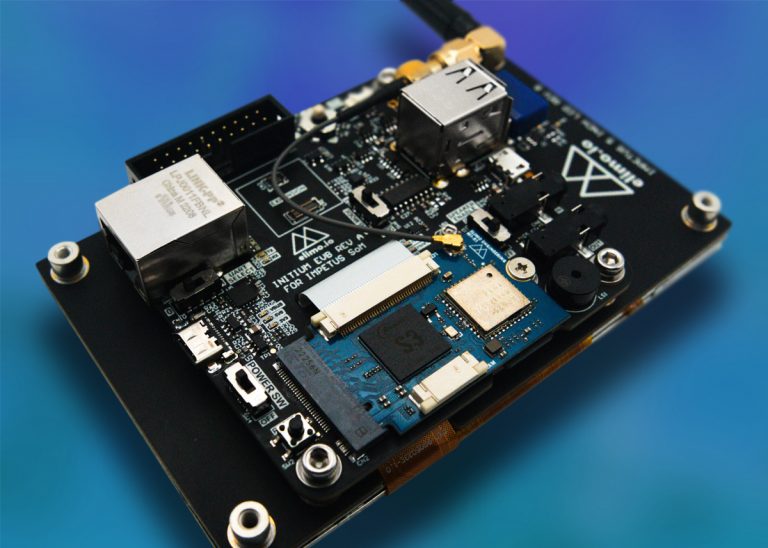 Teased at Hardware Pioneers Max, Mr. X is proud to finally present Elimo Engineering’s Impetus, a 42-mm, M2-form-factor System on Module (SoM) created to save design time in integrating a Linux system into your final use case. Elimo prides the M2 connector as the key strong point of this module as it facilitates quick-and-simple incorporation into an end product, dramatically reducing time to market.

At the centre of Impetus is the Sochip/Allwinner S3 SoC, with an ARM Cortex-A7 clocked at 1.2 GHz and paired with 1 Gb of DDR3 DRAM, generous for such a compact module; chatting to their team at Hardware Pioneers Max, it was clear that Elimo have spent extensive resources to enable the easy integration of Allwinners’ products into any design. Along with this device, Impetus provides the user with Broadcom 43455 WiFi IEEE 802.11abgn and Bluetooth 4.2/BLE, a MicroSD Card slot, and a host of other interfaces to build a complete system, including Ethernet and USB 2.0, audio line in and out, RGB LCD and MIPI camera interfaces, and a video engine for hardware accelerated encoding/decoding.

For easy evaluation of Impetus, Elimo created the Initium development platform, which breaks out Impetus’ M2-pin interfaces to convenient connectors, enabling immediate use of Impetus as you finalise the main boards of your end design. A USB-C connector is provided for power and easy access to an application UART over USB-UART bridge, and an Ethernet 10/100 PHY, a USB-2.0 OTG-capable connector, audio jacks, convenient diagnostic LEDs, and all the M2 signals are provided on a labelled header with an expansion slot for additional peripherals.

It’s not often that we see a company go to such lengths to make another manufacturer’s component useful to other engineers – Mr. X certainly takes his hat off to the team at Elimo – so, at least for now, we will consider the Impetus the gateway to Allwinner’s devices. I suppose in many ways, this SoM is similar in its application to how some may use a traditional Raspberry Pi, be that in consumer or industrial devices, though obviously the Pi is nowhere near as compact as Impetus and certainly not as easy to seamlessly integrate. Hey, we can’t fault the concept and design. Let us know how it performs!

Wanting to easily integrate Linux and wireless capability into your end product?