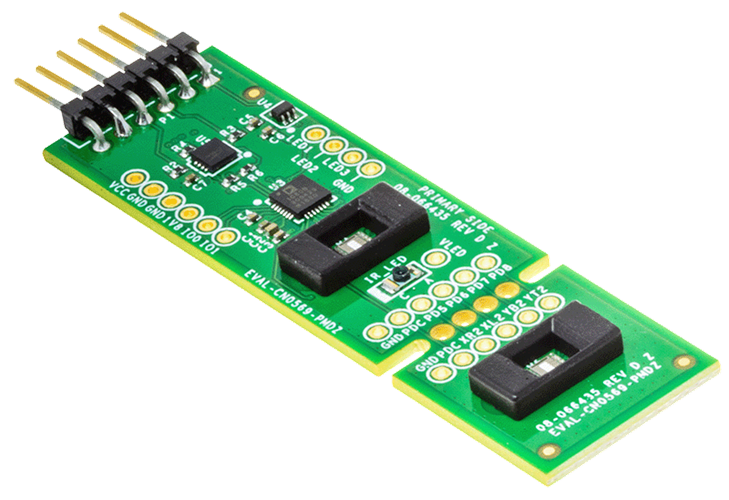 The idea behind the CN0569 is that touchless interfaces are a growing trend but that vision- and optics-based systems are dependent on reflected light, which varies with time of day – to name one of many factors – and can therefore have problems with accurate image detection because of visual noise. This can also be said for language-based systems where background noise and reverberations are equally problematic.

The CN0569 reference design solves this issue by having an onboard 850 nm infrared pulse source and two detectors that operate at wavelengths above 800 nm, meaning that the visual spectrum is not detected, and only reflections from the on-board source serve as the basis of the detected gesture. Each detector, an ADPD2140 Infrared Light Angle Sensor, provides 2-axis, single-point measurements of incident angles for infrared light, and by using a pair with a known spatial separation, the distance of the gesturing hand can be triangulated. My favourite thing about the CN0569 board design is that the second sensor comes attached but is milled for easy snap-off so that it can be placed further away for better differentiation. The typical gesture sensing range is up to 20 cm, and the sample rate is up to 512 samples per second, driven by the ADPD1080 Photometric Front End, which includes three 370 mA LED peak current drivers – only one is in use on the CN0569.

Algorithms for gesture recognition can be ported after being written in a high-level language on a host computer, and these should include stages to detect the beginning of a gesture, track hand movement during the gesture, and subsequently identify the gesture based on the movement of the hand. The ADICUP3029 Development Platform is recommended for testing the CN0569, and there is a Theremin Python script that converts the gesture readings into an observable format.

The intended markets for the CN0569 are intelligent buildings, consumer goods and services, and healthcare.

Test drive the CN0569 by applying for the board below.