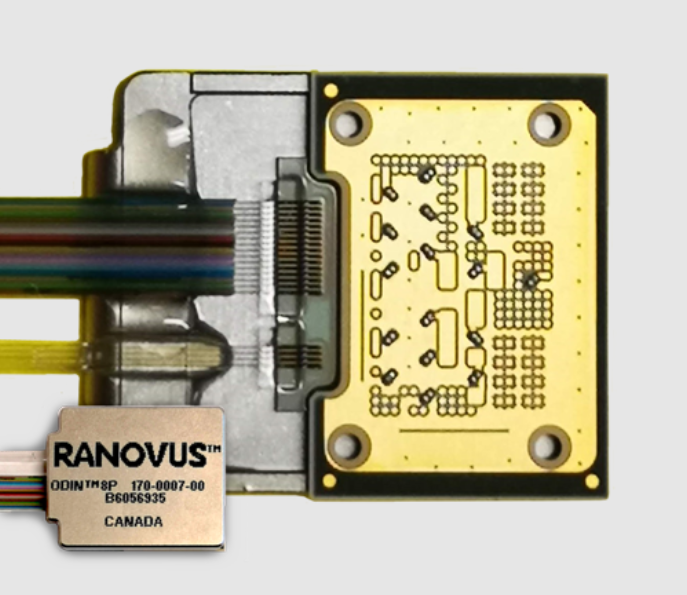 Eamon here: As someone who has previously spent far too much time aligning lasers, it was a bit of a spit-out-the-tea moment for me when I came across Ranovus’ Odin Single-Chip Optical Engine. Ranovus is a company that proclaims itself as a ‘disruptive innovator’, and by bringing together a team from many scientific and engineering backgrounds, they have created Odin, “the World’s first monolithic Electronic & Photonic Integrated Circuit (EPIC) platform for multi-terabit optical interconnect applications in data centres”. From the path I took to finding Odin, I got the feeling that AI/ML workloads are the targeted interest for the technology, the integrated photonics minimising the total power, footprint, and power consumption in a dedicated data centre.

But this application intrigues me far less than the technology itself. Inside a package smaller than a coin, there are RF drivers, control logic, integrated multi-wavelength Quantum Dot Lasers, photodetectors, and more. The integrated quantum dot lasers are used as a light source for data transmission (at 100Gbs/lambda and beyond), but the astounding part is that a single device can provide up to 96 wavelengths in the C-band (infrared) alone, allowing for replacement of 96 individual lasers in an equivalent system. Using Silicon Photonic Ring Resonators, there is even the ability to multiplex and demultiplex packets of laser signals, creating a highly scalable and compact communication geometry.

Obviously, there is far too much to this technology to be simply explained in a concise post, but in the simplest terms, Ranovus’ Odin EPIC seems like a gamechanger in creating more scalable and energy efficient data centres. Given that latter point, it is worth noting that the Odin-based Co-Packaged Optics (CPOs) 2.0 offer a 40% cost and power consumption saving over CPO 1.0, and the new technology is interoperable with the former, so it would seem that Ranovus appreciates energy efficiency without sacrificing backward compatibility.

Aside from consulting with Ranovus to see how best your system can work with Odin, I am unsure how easy a generic dev board would fit, and I am therefore not surprised there are none on Ranovus’ website, but that does not mean that the technology cannot be tested. How does this technology fit with your application, and am I completely missing the point by focussing on the laser and integrated photonics rather than the applications themselves?

(All images sourced from Ranovus)

Looking to use this in a data centre, or do you have something more disruptive in mind?