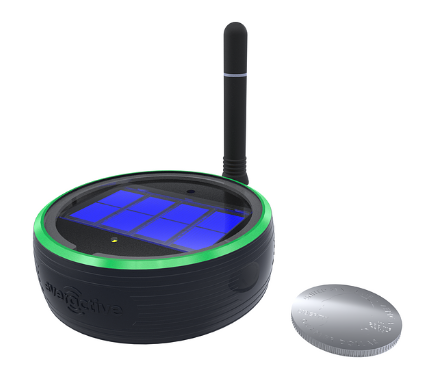 Everactive’s always-on Eversensors are powered exclusively from low levels of micro-renewable energy harvested from the surrounding environment, whether that be through dim indoor light, outdoor light, or small temperature differentials. These energy sources, as well as temperature, humidity, triaxial acceleration, pressure, and magnetic field provide the basis for a sensing dataset that enables hyperscale IoT users access to the insights they need to make an impact.

But what makes this technology important? Everactive has calculated that a trillion-sensor world would require 913 million daily battery replacements supported by a 28-billion-person labour force for battery maintenance. That is obviously not sustainable, or possible, and being in the IoT business, Everactive needed to figure out a solution to ‘the battery problem’.

Everactive’s semiconductor advances enable the longest-lasting, largest-scale, and most cost-effective wireless sensor networks through power requirements up to 1000 times lower than competing solutions, particularly when it comes to data transfer and running the devices. This enables small amounts of harvested energy to continuously and indefinitely power Everactive devices. Batteryless operation also drastically improves the reliability of sensor data and hardware as well as the environmental and maintenance costs of a sensor network.

To support this, Everactive invented a wireless protocol optimised for hyperscale IoT networks, enabling the deployment of large-scale wireless networks with minimal infrastructure, a range of hundreds of meters, up to 1000 nodes per gateway, and building penetrability using a sub-GHz protocol. Everactive’s managed network solution provides OTA updates to all hardware infrastructure, backhaul connectivity, uptime and data reliability, data visualisation with alerts, edge-to-cloud security, and more for a complete IoT communications solution.

Everactive’s first development kit enables third-party developers access to their revolutionary batteryless technology with a USB Evergateway and two Eversensors, each with a comprehensive sensor suite that simultaneously measures temperature, humidity, pressure, and triaxial acceleration. Utilising a low-light indoor PV harvester as the sole power source, these devices can measure and wirelessly transmit data every 15 seconds to Everactive’s managed, purpose-built network. This kit allows product developers to better understand and experiment with Everactive’s energy harvesting technology for designing sustainable, hyperscale IoT devices. With unlimited user accounts per kit, there’s no doubt that Everactive want their technology to become THE solution for the future of IoT sensing.

Looking to ditch batteries in your future IoT sensor products?