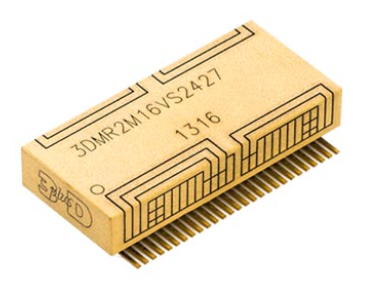 Eamon here: It’s no secret that aerospace applications require another level of engineering for components to survive such unforgiving environments, with mission lifetimes long enough to see your kids through their school years. 3D PLUS is a world-leading supplier of advanced high-density 3D microelectronic products and bare die and wafer level stacking technology that allows more than 85% volume and weight savings over traditional 2D solutions, essential for space missions where every gram counts.

Magneto-resistive Random Access Memory (MRAM) stores data using magnetic polarisation rather than electric charge, which brings the MRAM unlimited read/write endurance and Single Event Upset (SEU) immune characteristics, something worth considering for something that you may never see again once you send it into space, and these components have a proven lifetime for 15- to 18-year missions (spec’d at 20 years data retention), obviously with the quality level that space missions require; the radiation tolerance of these devices is TID >50 krad(Si) and SEL >85 MeV.cm3/mg. While there is no pure tin guarantee, 3D PLUS is willing to guarantee less than 97% tin. I would think that is more than reasonable, as much as everyone dreads whiskers.

3D PLUS’s Radiation Tolerant MRAM is available in a variety of temperature ranges and stacks of 1 Mb to 64 Mb organised x8, x16, x32, and x40 with a power supply of 3.3 V and a clock rate / access time of 40 ns. These devices are offered with a standard SOP footprint for high-resistance SMT assembly and for withstanding harsh thermal and mechanical environments. 3D PLUS MRAM products are used as a processor’s boot and program ROM and FPGA configuration memory in applications spanning sciences and deep space missions, earth observations, navigation, launchers and manned space vehicles, and telecommunications satellites.

3D PLUS make a wealth of space and high-density components, so if MRAM is not what you are looking for, but you still require radiation tolerance, consider some of their other options, including SRAM, SDRAM, PROM, EEPROM, NAND FLASH, RTIMS FLASH, NOR FLASH and more, and that’s just in memory. 3D PLUS also make radiation-tolerant computer cores, interfaces, POL converters, camera heads; the list goes on. They also make some industrial components, but all in all, I think they’re one to watch. If there’s ANYTHING by 3D PLUS that you want to evaluate, tell us in an application.

(Image sourced from 3D PLUS)

Need reliable memory for a long, harsh-environment application that’s beyond this world?